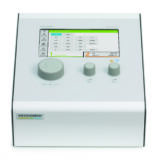 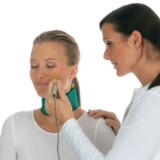 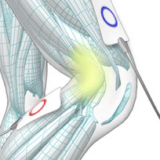 Professional electrotherapy and  diagnostics for hospitals, rehab and physiotherapy centres

for super-fast and clear working

based on body region, desired therapy effect or per alphabet for quick location of the desired treatment proposal

Perfected user guidance through combination of 7″ touch screen and PHYSIOMED one-button operation for comprehensive overview of the therapy parameters including all therapy timers; multifunctional intensity controls allowing for fast intensity reduction and quick switching between channels

enables impressively simple saving and calling up of the most popular applications – only two clicks to the therapy!

with graphical visualization of the curve profile

Warnings in case of intensity exceeding

The fundamental principle of special electrotherapy methods e.g. for spastic cerebral palsy, spasms following apoplectic insult and adductor spasms is the stimulation of the Golgi tendon organs, which in turn is aimed at inhibiting muscle spasticity at bone marrow level. Directly following inhibition of the affected muscle, in the second circuit the antagonistic muscles are stimulated. Dr. Felipe Medina presents an example of the adjuvant therapy option in a video.

Quite a few electrotherapy instruments today no longer emit stimulation currents in the form described in teaching manuals, and on which efficient electrotherapy is proven to be based. Instead of this – and in many cases due to cost savings – similar, but not identical, curve forms are used. Nobody knows exactly whether these cause the desired effects in tissue in the same way as the original currents. Instead of medium frequency currents, for example, low frequency ones are generated, and vice versa. In a direct comparison, the difference between ”genuine“ and ”similar“ currents can often be felt, but it only becomes visible when the current curves are viewed on an oscilloscope. Galvanic currents with spikes can be found, distorted instead of harmonic sinusoidal curves, or even deformed envelopes of diadynamic currents.
PHYSIOMED distances itself firmly from this trend of compromising therapeutic success only for the sake of maximising profits. PHYSIOMED instruments therefore only supply ‘clean’ currents. This also explains the often heard opinion of competent electrotherapy users, that despite using the same parameters, they obtain better therapeutic results with PHYSIOMED instruments than with other stimulation current instruments.

Electrotherapy is an important element of physical therapy. Current stimulation will treat the tissue via electrodes (plate electrodes, vacuum electrodes, adhesive electrodes) on the selected areas. Depending on the current mode and the selection of parameters (e.g. impulse form, impulse duration, pause time, frequency, intensity) the stimulation current can have significant effects in the following areas of treatment:

According to their generation and specific method of treating the tissue the following classifications of the different stimulation currents can be made:

Electrotherapy is beneficial within a broad range of applications, including, but not limited to:

Do you want to learn more?

Get a non-binding offer!